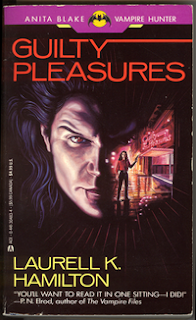 In this first book of the Series Anita Blake Vampire Hunter, we met Anita for the first time, we get involved in her fantastic world, in there exists magic, werewolves, zombies and of course vampires.

Anita is a zombie reanimator, she Works for Reanimators Inc.; and occasionally Works in some cases with the police as Vampire Executioner. She is a small and short woman, however that is not an issue because every where she goes, she makes people feel her presence, she is strong, hard and practical, she does not doubt if she have to make a quick decision; feel the need to protect the ones who are weaker than her, even if this sometimes includes submissive vampires or that aren’t too old, and men or women who had been seduced by the vampire tricks.

In this occasion the city vampires want to hire Anita to solve some mysterious crimes involving the death of some vampires, but she has as a rule not to work for them. Vampires forced her by blackmailing her with killing her best friend Catherine. While Anita investigates the murders, she is going to be involved with the local vampires, will discover things that upset her and she realize that sometimes, some decisions aren’t simple, such as deciding which Vampire is less dangerous for the city.

This is a high recommendable book, I loved it when I read it for the first time, Anita is a great heroine, even her character is not such as the “nice girl”, she is a great woman that defends the one who needs her, and doesn’t doubt in taking risks for the others, that makes you like her y wish reading more about her. Vampire Jean-Claude, is pretty handsome, adorable and completely French, he can enchant you and scare you because the facility he has to seduce with only his voice. The other characters are nice too and some of them like Willie McCoy are even dear, its easy to care about him.
Publicado por RoseCBR en 12:18