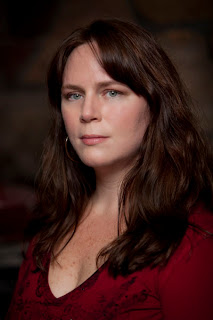 And since is Halloween I'm giving you and myself a gift, an interview with the awesome Michelle Zink, author of Prophecy of the Sisters and Guardian of the Gate.

Hope you enjoy this interview as much as I did!!

Remember soon to come some news about Guardian of the Gate, then its review, and finally a GiveAway!!!


So Michelle, can you tell us a little bit more about yourself?
Mu kids and I are big film and music fans. We spend most of our time together watching movies, going to concerts, and just talking (sometimes late into the night) about everything under the sun.It's a low-key life that I cherish on a daily basis. I love to travel, too, and look forward to doing more of that in the near future.

When did you decide you wanted to be a writer?
If you had asked me when I was a child and teen what I wanted to do when I grew up, I would have said, “Be a writer.” But I lost it somewhere along the way as I was encouraged to get a “real” job, be responsible, etc. I really didn’t have any role models or anyone who even talked to me about being a writer or what a career as a writer would look like. It all seemed very mysterious! By the time I was 29, I was working as a Director of Sales and Marketing for a technology consulting firm. I was making plenty of money, had a house a mile from the beach, a nanny and a housekeeper – and was completely miserable. I couldn’t imagine spending the rest of my life getting up every morning only to spend ten hours every day doing something that didn’t interest me at all. So I did this crazy thing and sold my house, quite my job, and moved myself, my then-husband, and my four children (who were between the ages of 2 and 9 at the time) 3,000 miles to a small town in New York. It was beautiful, quiet, and most importantly, cheap! The cheap part was crucial, because it meant that I could take a break from being the primary breadwinner and take some time to figure out what I really wanted and who I really was. During the 2-3 years it took me to find my way back to writing, I learned that I didn’t need as much STUFF as I thought I did. I found that I was very happy and fulfilled at home with the woodstove going, baking from scratch, reading with my children, and writing. And finding my writing again was like breathing. It was an epiphany, and I suddenly couldn’t imagine how I’d lived without it for so many years. All of my worldly cares fell away when I was writing, and I had the greatest sense of euphoria. I felt ALIVE for the first time since I was a teenager. I wanted to hang onto that feeling, so I wrote more and more and more.

When did you started to write?
I started writing seriously in 2005 and finished five novels over the next two-and-a-half years before Prophecy (my fifth finished book) sold to Little Brown in July of 2007.

How the idea of Prophecy of the Sisters was born?
I get a lot of my ideas from ancient myths and legends. Angels and demons are kind of my thing (as you can probably tell from Prophecy), so I read a lot about them. Sometimes nothing happens and I just keep reading, but every now and then, something will spark an idea, and I’ll think, “Waaaaaait a minute!” The initial seed of the story came from the biblical legend of the Watchers, a legion of angels who were said to have been sent to Earth to watch over mankind. In the legend, the angels fell in love with mortal women and were banished from Heaven, after which they were referred to as the Lost Souls. Hearing that phrase – the Lost Souls – was my dun-dun DUN! moment.

Did you scare yourself while writing it?
Lol! Sometimes! Especially since I'd write late at night and listen to the film score to the movie The Village. There's one piece that always made me jump!

Did you do any kind of research for it?
I did research as needed to maintain the authenticity of the time period, but I didn't do as much of it as you might think. This is because I've always felt Prophecy is a fantasy that happens to be set in the very dark, Gothic era of the 1890s, not historical fiction. I never wanted the story to take a back seat to period details.

Is any character based on real people?
Actually, no! My characters come to me more or less fully formed, and in this case, they weren't based on anyone at all.

How was the process of writing and editing for you?
I love the stream-of-consiousness feeling I get while drafting. It's so fun to just immerse myself in the atmosphere of my story and give myself permission NOT to worry about the details just yet. I enjoy editing for a different reason. It's more academic for me, I guess. And of course, it's always scary when you first start deconstructing pieces of your book - all the while just HOPING you're going to be able to put it all back together again. But I enjoy this part, too, because I feel like I learn so much about the craft of writing and the construction of a novel.

How many time passed between writing and publishing Prophecy of the Sisters?
Prophecy took me three months to write and ten months to edit after which it sold in a three-day pre-empt.

Was it hard publishing it?
I’m not gonna lie; it’s not easy. Prophecy of the Sisters was my fifth book, and I wrote 6-8 hours a day for two-and-a-half years before selling it. I tried (and failed) to get an agent with book #1, got an agent with book #2 but didn’t sell it, and finally went out with Prophecy (and had two books in between that no one ever read). If you want to be published with any major, traditional publisher, you really should get an agent first. They represent your interests, advise you on changes that will increase your chances of selling your book, and act as your advocate in all negotiations. After that, your agent will submit your manuscript to editors based on his/her understanding of what each editor is looking to add to their list. Then, it’s all a matter of an editor loving it and being able to sell the rest of the Acquisitions Committee on its potential.
Without spoilers, what does readers should expect from Guardian of the Gate?
Guardian of the Gate ups the action with an epic journey, a mysterious new guy, and a betrayal of unimaginable proportions.

Your favorite Book?
That's a tough one, but I'd have to say White Oleander by Janet Fitch. If you haven't read it, you MUST.

Your favorite author?
Stephen King for sure! He's had such a huge influence on my work.

This is a question I always love to do to writers, do you love writing? And why?
I do love it, but it's even more than that. I have a chaotic mind. Writing's the only thing that truly makes me feel centered. It's like breathing. I honestly don't know how I'd stay sane without it.

Finally, anything else you would like to share with us?
Just a big thank you for hosting me on your blog, Rose, and another one for all the readers out there who've been so unbelievably supportive of Prophecy!Love.

As I've say it, Ms. Zink, is an awesome lady, and suuuper kind, and I'm grateful she took some of her time and share it with us.
Enjoy your Halloween weekend, read a book, read a Michelle Zink's book!!!