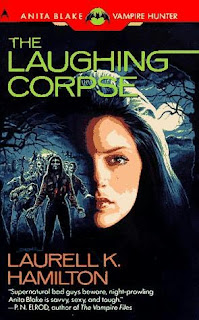 Once again we meet Anita Blake, we discover more of her personality and see how often her internal dialogs are very like those of any another girl, the typical one " what should I ware? " Only that with a brave draft, " what should I ware that lets me hide my weapons and knives? ". The history began as any usual day in Anita Blake's life, this one goes to a job appointment ; her boss Bert, ride her to meet a wealthy client who wants to hire her services to wake up a zombie over two hundred years. She desists since she knows that the raising of such an ancient zombie implies a human sacrifice, but her client was not accepting a no as response. And while she has difficulties and risk runs because of this client, also has to fight with the fact that she will be a bridesmaid in the wedding of her best friend Catherine and that very to her sorrow she will have to use a pink dress. For Anita the problems do not come alone, always several come together, now the police have called her to solve the murder of a family; one of the bloodiest crimes Anita has seen, the brutality with which this family was murdered and destroyed, does that Anita wants to catch the culprit as soon as possible in order that it does not happen again. And the possible causer of these acts most be a non-dead , probably a zombie, but they were few those who had the skill of raising to the zombies and Anita has to discover, who among her acquaintances had woken a zombie up and had made it got out of control and murdering without measure. For if it was few Jean-Claude, the attractive main Vampire of the city, was sure that Anita had to be his lover and human servant and not wise Anita like to free of those propositions even she was feeling tempted for one of these. And to fight with the fact that her power was bigger than she thought wasn’t a simple task either.
Publicado por RoseCBR en 11:54